Training Trainers in the Promotion of Child Participation

The face-to-face stage of the semi-distance course on “Training Trainers in the Promotion of Child Participation” began last 5 September in Kingston, Jamaica, within the framework of the project on the Promotion and Protection of Children´s Rights in the Inter-American System, implemented by the IIN and the Canadian International Development Agency (CIDA).

The objective of this course, which was also carried out in Colombia and Guatemala, and whose online stage has already been completed in Jamaica, was to contribute knowledge and technical instruments related to promoting and ensuring children´s right to participate in subjects that concern them, from an updated and contextualized perspective with regard to American reality.

Twenty-two of the thirty-three officials from different Jamaican State institutions “Ministries of Justice and of Education, and the Child Development Agency (CDA)” who took part in the online stage of the course participated in this face-to-face stage.

Representing the IIN in this activity were Kerry Ann Lewis, responsible for the IIN-CIDA project in Jamaica, George Leamon, project team representative, and Alfonso Gutiérrez, who is responsible for the participation component. The course was led by specialist Marie Wernham.

The principal subjects addressed during this second stage of the course, which ended on 9 September, were the importance of perceiving children as rights-holders, the promotion of the right to participate and participation-enabling processes. 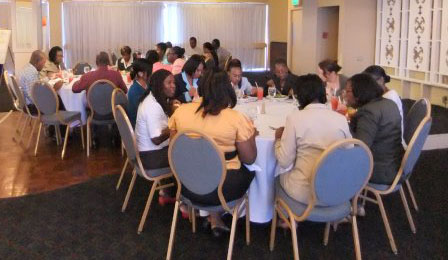 Strong Ideas. A dialogue with the academy

In 1952 the #IIN promoted the first training project in Child Protection. The participants, officials from various organizations in the Americas, were true agents of change. Today the Institute continues with training through the #PIC.